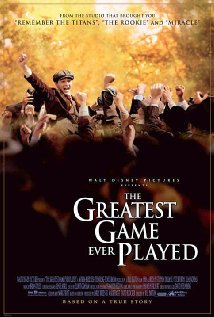 tonight, i came home from work at around 9pm, my girlfriend had been to london and i had no appointments for the evening… so what to do? there’s still this golf movie i wanted to see, i thought to myself, and that’s exactly what i did. i used the opportune moment and watched shia labeouf in “the greatest game ever played” from 2005.

the plot is easy but based on a true story: a young working class boy, francis ouimet, is addicted to golf and works as a caddie in an upper class boston golf club. he admires harry vardon, a famous british golf player which has kind of a similar background. francis has huge golfing abilities and plays some successful tournaments but both his family and the establishment oppose to let him live his dream.

after giving up this sport in favour of working in a “real” job and to fulfill the family’s wishes, he gets the chance to play the qualification for the US open. no need to explain that he makes it to the final round and climbs the leaderboard just to a leading three-some, harry vardon included. the decision is postponed as all three have the same score and a 18-holes play-off is played the following day.

at the end – you might have guessed correctly from the picture – francis takes the lead, the pot and all the fame. he’s won against his family, the upper class, his own barriers and earns much of respect.

the film is light, has some nice pictures but it’s not knocking somebody’s socks off. it’s a bit of a bagger vance story and outlines some interesting ancient golfing facts, but i’m not sure whether it can reach it. but since this is a true story, which makes it a bit more interesting, check out francis ouimet at wikipedia and watch this trailer to make your own opinion: