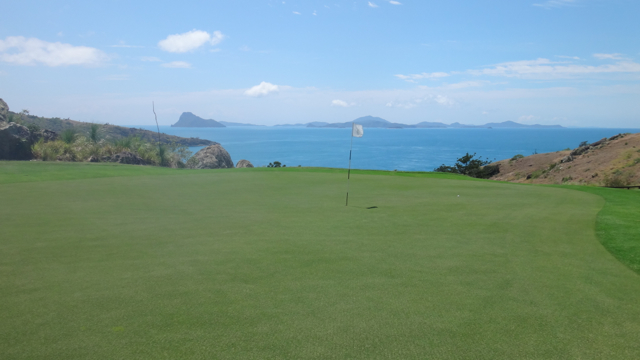 I was fortunate enough to travel the east coast of Australia recently. Together with my girlfriend we packed all the good and exciting stuff into a trip along the coast from Gold Coast to Port Douglas. One definite highlight was the beautiful village of Noosa (Heads) as part of the Sunshine Coast north of Brisbane and another one was the glamorous and sophisticated island resort of Hamilton Island.

Hamilton is one of 74 Whitsunday Islands right by the central section of the Great Barrier Reef, but only one of eight which are inhabited. It is really the rich man’s dreams coming true as you find here multiple luxurious hotel and apartment properties (a rated 6-star establishment amongst them), beach side villas overlooking the turquoise coral sea, beach clubs, a posh marina, yacht club, expensive restaurants and lots of recreations and possibilities to spend the day (and money).

Golfing for sure is one of these possibilities, and as you are a golf nut as well, it is one of the best! On Hamilton Island you generally use golf carts instead of real cars to get around the isle, but for a round of golf you first need a different vehicle: a vessel! That’s because the golf course actually is not even located on Hamilton Island – it has its own – Dent Island, a beautiful and only 10 minutes ferry ride from Hamilton Marina.

But let me start from the beginning: I managed to get a 7:30 tee time and therefore a ferry boarding time of 7:00. Walking towards the golf jetty in the Hamilton Marina, I was greeted by the first golf club staff: “Mr Rose? We have a 7:30 tee time down for you. Welcome onboard! Please take a seat”. 10 minutes later we touched ground on Dent Island and I was picked up by someone who chauffeured me to the club house which is not far but on top of a steep cart path. In the portal of the modern building someone else provided me with a moisty, cold towel as a first refreshment. Another person came up to me and said something like “Good morning Mr Rose. How are you this morning? This is your cart, these are your clubs for today, we have complimentary water for you in this box, complimentary tees are here and this is how the GPS system works…” All in all a perfect service and such a great hospitality! Really fantastic! Without having seen one single golf hole, I immediately loved the place, seriously!

I skipped the driving range, which by the way is a huge lake in which you shoot your balls. Instead I made my way to the putting green and used one of the provided driving nets, just to loosen the muscles a bit and to get used to the swing rhythm again.

Then it was about time to hit the course itself – the place I was so excited about for such a long time! And to cut a long story short: I was not at all disappointed in the end. This piece of land is simply golf heaven. The layout (designed by 5-times Open Champion Peter Thomson) is remarkable and so unique in its setting, I never had the feeling that I ever played a particular similar hole in my life before. Together with the views across the Whitsunday Islands under the blue skies; this course really blew me away. Fortunately the young couple behind me was pretty slow so I had enough time to take some nice pictures. Without them you wouldn’t understand my enthusiasm I reckon.

After the first six or nine holes I was pretty sure this course is somewhere in my Top 3 of the best courses I played so far, but after the complete round there was just one suitable prize to win in my personal ranking – best course ever played!

I shot one birdie and five pars, which is not too shabby after all but I as well lost quite a few balls to the deep rough. Losing balls equals penalty strokes which never look good on a score card, hence I’m not über-excited about my round stroke-wise, but I will never forget this round as the course is a real stunner and earns its place amongst the world’s best golf courses in my opinion. 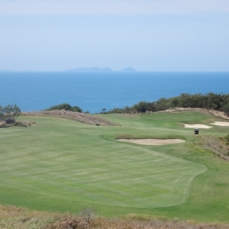 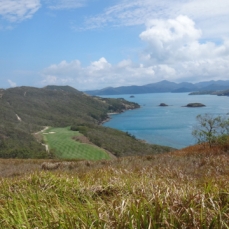 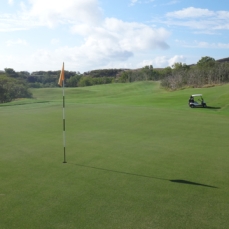 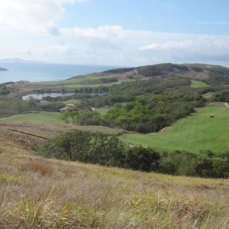 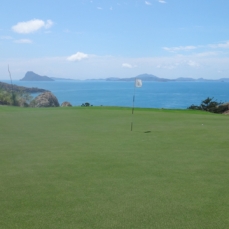 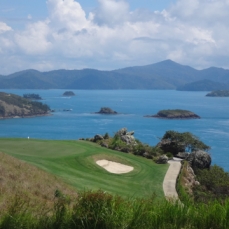 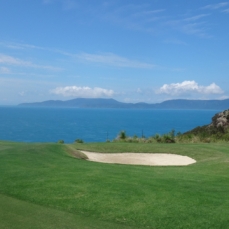 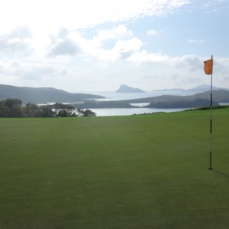 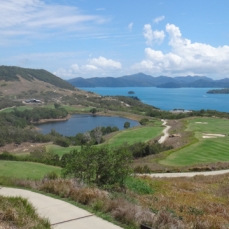 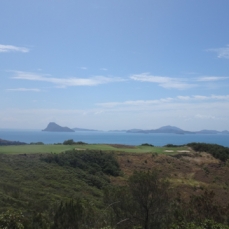 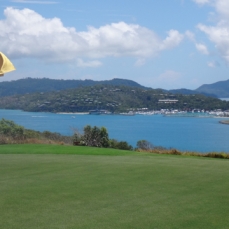 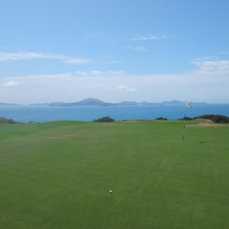 Now let me emphasise on some of the holes which really stand out.

In my opinion the most stunning stretch of holes is the 13 through 16.

13. It’s a pretty straight par 4 with a blind tee shot. The second shot is then more or less at the top of the world as this ridge forms the highest elevation of the island with a crystal clear 360-degree view. I had to chip out the left rough and missed a putt, and ended up with a double bogey.

14. Number 14 is a tough par 3, 143 meters from the men’s tees, asking for courage and instinct as there is a small canyon between tee boxes and the well protected putting surface. I hit a nice 6 iron five meters left to the pin, two putts: par.

15. This par 4 plays south again into the prevailing wind and marks the most southern part of the course. It’s located more or less on the ridge of the mountain and offers great views across several islands including Hamilton Island with its marina and airport. It’s played downhill from elevated tees and is really beautiful. My second shot was a bit too long, ended up in the rough, so I left the green with another double bogey.

16. Wow, the 16, what a golf hole! I was immediately reminded of the 7th at Pebble Beach. It’s a 149 meters par 3 from again elevated tee boxes. The backdrop, the Coral Sea, Whitsunday and Hamilton Island – unbelievably fantastic views. I landed a 5 iron shot couple of meters from the pin and played par with two putts.

Believe me or not, most of the other 14 holes I haven’t mentioned here are equally stunning. I highly recommend you go and see for yourself. It’s an incredible venue and worth every cent spending. Together with some days on Hamilton with sailing, snorkeling, beaching, wining and dining this place on earth deserves to be on everybody’s bucket list, that’s for sure!

One thought on “This must be paradise: Hamilton Island Golf Club in Queensland, Australia”