Last week I fortunately made a small step into the right direction, handicap-wise. I played the monthly club championship and somehow managed to withstand the windy and rainy conditions and carded down an 87 in the end. 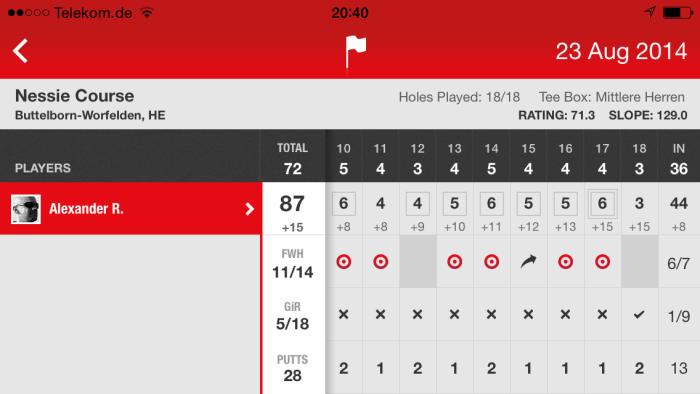 It’s been a while that I played a +15 round, especially on such tough course like the Nessie at Golfpark Bachgrund. It wasn’t just pouring down in between, the course has loads of water hazards to offer. That was basically the reason I left all my woods in the trunk of my car and played only irons, up to my 2-iron. That turned out to be a very conservative but smart idea. And I prefer smart over pretentious.

It was a Stableford tournament and I ended up 2nd net in my class and 6th gross overall—which is pretty cool I have to admit. I’m sure I never made it that high on the overall tournament leaderboard ever before.

The stretch of holes 5 to 11 I played even par, only one bogey with one birdie. After that I somehow fell back into my bogey habits and lost 7 strokes on the last 7 holes. That was definitely not because of bad putting. The putter was hot that day and for the last 7 holes I only needed 10 putts, 28 in total—which is not bad at all.

With this round I lowered my handicap down to 14.8 and am a bit closer now to the end-of-season goal of 12. Let’s see, I’m pretty confident that there is more to squeeze out, but obviously as well a lot of work to do.

Hole 2 at Golfclub Friedberg. The Taunus mountains in the background, especially the Großer Feldberg, are my weekly MTB territory. Showing two of my favorite weekend pleasures in one picture!
Still not sure what this course/club is called. Golfclub Friedberg, or Golfpark am Löwenhof, or Sommerfeld Golf Friedberg. Three names and three websites for the same course...
Played a new course today. I mean it‘s new to me and I quite liked Golfclub Friedberg. No idea why I never played here before. Some really nice holes.