Folks, I’m back in action, back from honeymoon, 3.5 weeks of pure relaxation and a bit of golf. The time in Mauritius has been absolutely amazing. The weather could have been a bit better, but the hotels, the beaches and the people couldn’t be beaten.

A lot has happened during my absence: Europe won the Ryder Cup, Oliver Wilson won the Alfred Dunhill Links Championship, the US Ryder Cup team were ripping their captain’s heart out and many tiny other golf related things as well.

I was fortunate to see a bit of the Ryder Cup, but won’t dig into that issue anymore here on this blog. I’m happy the Euro boys won in style on home turf and that everybody had his stake in this beautiful team event. I can’t wait for 2016!

In Mauritius I played three lovely rounds of golf, which I really enjoyed. I will write a post on each day in the course of the following days. So keep in touch, more interesting stuff and pictures to come.

Today my new business cards arrived, that was a well appreciated quick turnaround. Just figured to go a bit more professional, especially because Golficiency seems to gain more and more attention over the last weeks. That’s (1) reading my blog stats in the backend and (2) reading the various emails in my inbox.

For the typography fans amongst you, I made some adjustments to the Golficiency logo. The current one is a Futura Bold typo whereas the one above is a new test whether I prefer the logo to be a FF Dax, which I find really nice for continuous text and somehow for the logo as well. What do you think?

Hi guys, I wish you all the best for the new year, may all your wishes come true, may you have success all year round, may you keep well and fit and may your handicap drop a lot during the next season! And you keep your fingers crossed for me too, OK?!

Any new year’s resolutions? Well I haven’t played much the last two years unfortunately, this should change dramatically. I have a feeling this year my handicap can come down a notch. Therefore to push myself I will use the hashtag #Project12 to cheer me up now and again. Let’s see what’s possible – I keep you posted!

Couple of days back, I received an email providing me the short information that the Black Knight himself, Mr Fitness, Mr Gary Player started following me on Twitter! I was overwhelmed really. I haven’t expected something like this.

The unbelievable master of golf, my personal hero, Mr Gary Player is following Golficiency on Twitter! This man… http://t.co/9FrGugWLQG

Thank you for the follow, Mr @GaryPlayer! You are pure inspiration, on and off the course! I'm so thankful and won't disappoint you!

Now I think to myself, when I can attract Gary Player, who else is possible?! Lee Westwood, Ian Poulter, Rory? – all these heavy tweeters. Tiger Woods is out of the league, he’s only following 18 people (Lindsey Vonn, Nike, his own companies/foundations and very few others). And to be honest, I’d prefer others. Media people probably: Di Dougherty, Stephanie Wei or Ashley Mayo?… yes, why not! Nick Faldo definitely, golf architects, golf photographers, agents, journalists and players alike… all very appreciated.

I’ll do my best tomorrow to create a much bigger Twitter footstep in the golfing industry – and I hope the world is listening (ehm reading)! Keep you posted. #overandout #goodnight

Oops! This is new… might be the words in your mind while looking at these new sites. Last night I switched to a new blog design. It’s not finished and there’s a bit to do here and there but you get a good feeling now already about the new design, new handling, new functions and different spots to find stuff.

I would be really interested an grateful if you could give me honest feedback on how you like it, whether it’s an improvement or possibly not. Especially one issue is interesting for me: very untypical for a blog, this site has a proper homepage now – a startpage from where you have to click once more to get to the blog itself. It’s one click more but for new visitors I reckon this is a much nicer way of welcoming them.

I’d really appreciate your support and taking the time to participate in this little poll. Multiple answers are possible. If you’ve never been to the old blog, then just rate the new look and feel.

END_OF_DOCUMENT_TOKEN_TO_BE_REPLACED

Long awaited package 1 (of 2) arrived couple of days ago. As you can see I have produced a dozen of nice wrist bands with the Golficiency URL engraved. And before you ask: No, I won’t sell them. I ordered just for me and for some (golf) friends and consider these just as a treat for very few people who appreciate wearing Golficiency stuff.

Probably you ask yourself, why the heck did I do this. But it’s really just a cool feeling to carry one of these trendy wrist bands with my own brand name and blog site on it.

Thoughtful readers might have realised that the t-shirts in the shop show a different font type than used in the header or for all the other online media. In order to freshen up some bits and pieces I just updated headers for the website, the shop and icons and avatars for Twitter and Facebook.

As you can see above, this is the new header. It follows the same approach as the last, but offers some additions and changes: 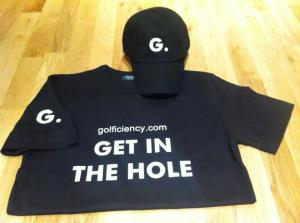 1. The official type face for Golficiency is now ‘Futura‘. The URL is written in this font, so is the G on left hand side.

2. The G is accompanied by a dot. First, to make clear this is an abbreviation and second, in order to indicate the funny ambiguity to the ‘G-spot’. For sure the dot/spot can be interpreted as a golf ball too. In order to not destroy the symmetry the dot is not shown in the icons for Facebook or Twitter.

I hope you like these changes. Let me know what you think.

I love golf and I really like photography. Two things that match quite well if you think of beautiful pictures of amazing courses. Basically the best of two worlds for me – joint together.

Instagram is the perfect system for that. It allows taking, adjusting and sharing of your pictures on-the-fly with your smartphone and works pretty well on golf courses I can tell you. So if you are interested in the artistic side of golf as well, go check it out online (www.instagram.com/golficiency) or download the app to your phone and follow @golficiency to get all the new pictures fed to your Instagram timeline.

whoever it was, the number 3000 visitor on the golficiency blog, thank you very much! and many thanks to all the other 2999 hits as well. i’m very grateful for the support and really appreciate every interaction with you.

so to do some number crunching:

i think that’s not too shabby for a private blog that i create in my little spare time. but i will for sure try to immensly increase the audience of this blog in the near future and hence will provide more interesting, in-depth and relevant stories, topics, data and reports. so stay in touch i’d suggest!! thanks again!

wordpress, where golficiency is hosted, made some really nice progress over the last months with automatic post sharing and pushing to social media networks like facebook and twitter. in facebook for example, my posts are now not fetched by third-party applications anymore but automatically pushed by wordpress the second it gets published on the blog. easy!

you shouldn’t notice any difference. if so, please tell me!