Yesterday I met a colleague to play a nice and sunny round of golf. Nothing special about it. But two things I’d like to mention here. First, the guy I was playing with hasn’t played a round of golf for 9 years. He played quite regularly as a youngster, then focussed on a tough job and on family later. Golf was never possible these days.

We met over lunch couple of times and chatted after business meetings. We talked business and we talked golf, I don’t really know why. He told me he once played, I told him I’m absolutely crazy about the game and one led to the other. He thought about golf more and more and decided to get his clubs out of the basement. And so we played a great round yesterday. Of course his score wasn’t good but we had fun, he started to feel the golf-bug again and decided to start play golf more regularly now.

Another happy golfer back on the course!

And it showed something: usually I don’t talk about playing golf so much when I’m with others. But when I do see some interest in the topic I praise the sport big time and keep it rolling. He’s not the first I convinced to play more golf, probably to join a local club to play more often in order to fully enjoy this beautiful sport.

Let’s grow the sport again. Play with some you hardly know, meet up and talk about golf and how cool it is. Because it really is! Give those a little guidance, golf hand holding if you will. It doesn’t take much to spark the interest in those who already had contact to golf in the past. As yesterday showed it’s super easy if you are open and willing to help others get access, fun and ability again. 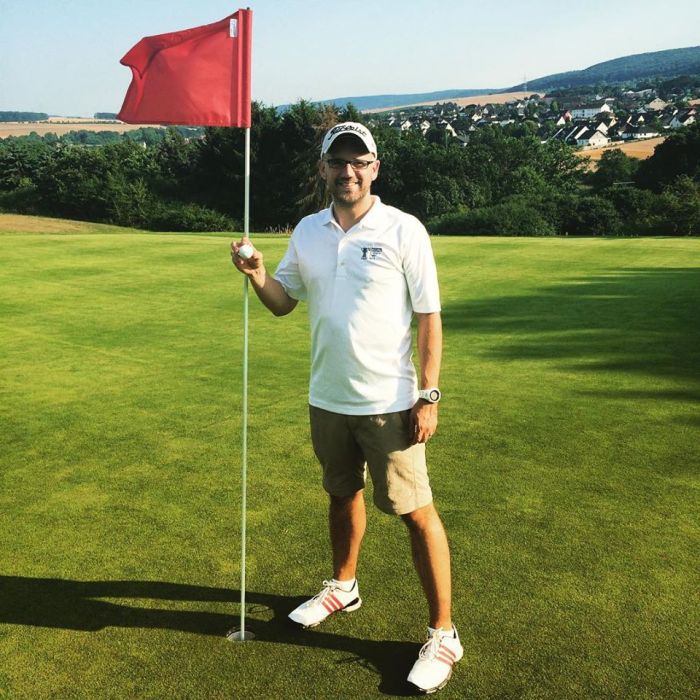 And there was another reason yesterday was a good golf day, a good golf day for me at least. I shot an 81, a +9, my best round so far and even scored an eagle, my first ever! I was absolutely over the moon. On a par-4 with a 100m pitch onto the green, and it rolled, and it rolled and in it went. For a split second I wanted to do the Jimenez dance but I just threw away my wedge and the cap and screamed out loud. Golf is great! One step closer to #Break80 and #Project12. And you know what, I only hit irons, not a single driver, 3-wood or hybrid shot. I carried a 2- and 3-iron to be fair.

I obviously played quite well (for my handicap) but could have saved even more shots, there were some nasty 3-putts on my card later and I’ve been in bunkers at least 5 times. Anyway, a good round. It had over 30°C all the time, we both were carrying our bags, the course is quite hilly in parts and the clubs I used yesterday are 15 years old, yes 1-5. Really interesting round… more of those please!