When you are an avid golfer and you are staying in George, South Africa for a little while, you have a couple of choices. You have 3 world-famous Gary Player golf courses at Fancourt to choose from, one Ernie Els signature course at Oubaai, the George Golf Club and at least 5 other courses in the region not far from each other.

Fancourt are quite strict with people who are admitted to play the famous ‘Links’ course. That’s generally just possible for estate residents and resort guests. As we stayed at the Oubaai Resort a bit outside of town in Herold’s Bay, not at Fancourt, we figured it’s probably not a bad idea to play the resort’s own Oubaai course. Especially because the Montagu course at Fancourt was blocked for a corporate tournament that day.

A word and a blow, we got a tee time quite short notice—2 hours in advance really. How is that even possible, you might ask, but truth be told, the hotel and the course was pretty empty. Especially the hotel seemed as if we and maybe another handful were the only guests on the rather large compound. What seemed weird in the hotel in the beginning turned out to be quite cool on the golf course, as we hardly saw anybody else playing there.

But first things first. Oubaai is an Ernie Els signature golf course, and it’s actually his first one in South Africa. And although the hotel complex is falling behind in quality, the course seems to be in rather OK shape. There might be some yellow-ish areas here and there and some others which lack maintenance, but nothing too bad to mention.

The course is a very typical hotel resort property layout with wide fairways, mainly challenging golfers not with the tee shot but with the shot into the green. It features an interesting design but is far from being overly complicated, difficult or consequently exciting. But it’s not getting boring either. All golf holes have their right to exist in the way they do and there are at least two fantastic and outstanding holes: the 6th and the 17th. 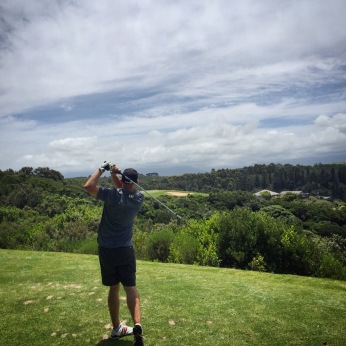 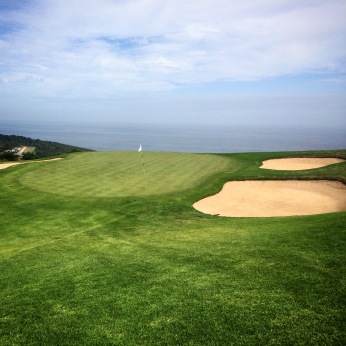 The 6th is a 180m par-3 over a gorge (for men) and hence demands a brave tee shot to a fairly small target. This is by far the most interesting hole on the course, at least in heart beats per minute terms.

We finished up our round surprisingly quick for a high-season mid-day round of golf but quite liked the fact that it was possible at all.

The only sub-optimal points I’d like to mention are the pretty lame GPS and screen devices on board the golf carts. They are non-touch-screen devices and lack quite some functionality compared to those with touch screens.

The other annoying thing is that the golf club somehow belongs to the hotel, but somehow doesn’t. So you can’t charge any purchases or beverages/food onto your room bill, nor are you allowed to enter the property without the hotel porter who takes you to the club house in a 15 minute ride with a golf cart. All that is for security reasons obviously as nobody should be allowed to enter the golf housing estate without proper and official company. Understandable but a bit inconvenient if you ask me. As in all golf estates in South Africa the upper ten thousand want to feel secure when they step outside their huge beachside and clifftop mansions. Point taken. But there must be other ways to keep out the non-golfing burglars. It works in other estates too.

We were later told that Nelson Mandela’s niece lives on the property (in quite some palace) and even Ernie Els, Mr Big Easy himself, lives just around the corner from there, at least when he’s around which obviously is not too often as a touring professional with other residences in Florida and London.

By the way, as a warning, if you are like me and you booked the hotel not only for golf, but for the Hyatt Regency resort quality, the hotel amenities and the South Africa Golf Hall of Fame museum on premise, please be warned: the Hyatt Regency group left the resort to new owners a while ago, all shops in the yard are closed down, the overall look and feel of the hotel complex has to be described as ‘surrendering’ and last but not least the South Africa Golf Hall of Fame was also closed down and apparently moved on to Cape Town.

So after all, some mixed feelings about the hotel property in general but quite positive on the course itself. Not a top-notch course from an architectural standpoint but absolutely a great day on the course with breathtaking views.

You may or may not know, Golficiency will travel to South Africa later this year. We’ll be heading south again to Africa and this time it’s the Cape region we’re gonna travel to.

The planning and organisation is in full swing but nothing is really fixed yet. Therefore the overall agenda is quite packed, but we’re still trying to figure out how to get all the dots connected.

Obviously on our list is a safari, then traveling along the Garden Route, a bit of hiking, beaching and whale watching at the coast, wining and dining in the Winelands, sightseeing at the Cape Peninsula, chilling in Camps Bay and then finishing and relaxing in the beautiful city of Cape Town.

When you’ve been there already and you know what I’m talking about here, then you are lucky. I’ve never touched ground on South African soil, but I can’t wait to and will definitely read more and more about this great country over the next months.

One of all the great things you can do in South Africa as well is golfing! The British brought their love for the game and it stayed when they left. Plus in this region you have the perfect golf weather all year round. That in combination with numerous first class courses makes this place on earth somewhat special; a golfing heaven.

I talked to quite a number of people already, received a lot of great advice and I’ve read so much about golf in RSA over the last weeks that I’m pretty confident that I came up with a superb list of golf courses which I could play. As I said, the planning is not yet fully done and I have currently no feeling for how many golf days I can manage to squeeze in but if I could, I’d play all of them!

Due to the route we’re taking and to reduce the number of domestic flights, I crossed out two major golf destinations already. One being Sun City and the other one the famous Leopard Creek Country Club, just at the southern tip of the world famous Kruger National Park.

What I came up with is a list of some highly regarded courses and clubs, which I tried to group in sort of the geographical order along the south coast of South Africa (incl. architects):

So that’s the list of courses which is my basis for further planning. I keep you in the loop once I decide on further steps in the organisation process. As always there might be some changes to the current plan but I have to start with something.

Even Gary Player likes the idea!

I really feel humbled that Gary Player from time to time responds to my tweets. He is one of my heroes, not only for the golf but from a personality standpoint as well and I can’t wait to be in South Africa, walk in his shoes and play golf courses that he had designed. I have a similar strong feeling to Ernie Els and as he’s from RSA as well, I’m sure the trip will be unforgettable.

Unreal. Scores were unreal, too. In another way though ;)
#BlueWhiteGreen all the way. Great golf day, playing yet another Deutsche Bank competition in Rhein-Main area, Germany.
Second round of the year. Golden fall. Really nice weather and course in good shape compared to last years.