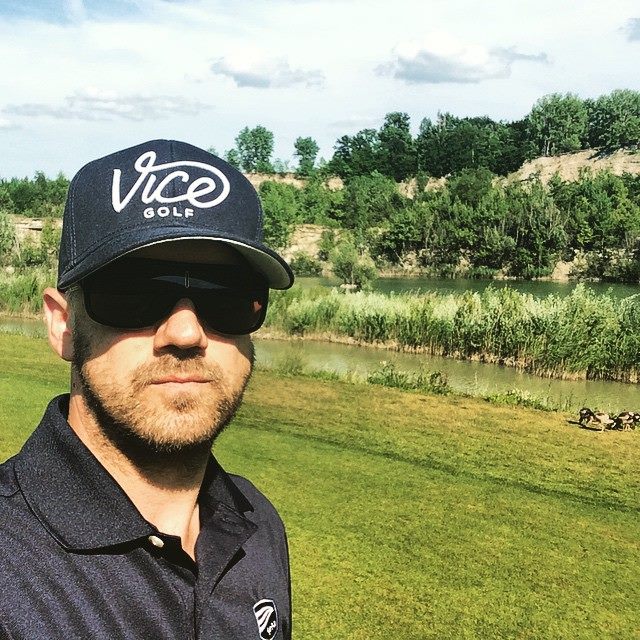 Luckily I was playing quite a bit lately, not too much, but I managed to get at least one round of golf scheduled in a week—which is quite an achievement for me. Anyway, I played often, practiced more than usual on both range and the putting green and I do see some improvement. Yes, I still do some stupid shots like anyone else but I feel more confident with my swing, get back to the touch and feel around greens I once had and my long play becomes more predictable.

One lesson learned is definitely that it was a good thing to decrease swing speed. This helped me a lot swinging on the right plane, creating a repeatable rhythm and a way to get the club to the ball always in the same horizontal and vertical axis. As well has this created a possibility for me to synchronise the upper, lower body and arms a bit better. Now I can swing easier from the outside to the inside in order to create straight shots where in the past particularly woods went way left. And in terms of distance, I might lose some metres here and there, but I’m still long enough, longer than average and I really prefer 200m straight like an arrow over 230m but 50m off line into the next water hazard. Smart course management, keep it in play, that’s what counts!

Furthermore I started to use a laser rangefinder which definitely helps on the range a lot to practice with a certain goal. Instead of just hitting bucket after bucket trying to shoot as straight as possible, I pick special targets, get the exact distance, pick the club I would have taken on the course, align and shoot. Three or four balls max, probably play around with different trajectory and backswings and then look for another target and do the same thing again.

Many more rounds to come! Surely have to do some severe putting sessions: (1) sloping and (2) distance control are on the agenda. Sometimes I struggle with wrong green reading in combination with wrong speed. Especially on very contoured greens this becomes an issue, and 3-putts are the result. In the second half of the year I try not to leave my putts short to give each and every one of them a chance. This in combination with better green reading should bring down my putting average of 36 down to something more like 30 over the next weeks.

Given the above, I’ve written down my main factors or goals I’d like to achieve over the next, say, 12 weeks:

In the beginning of the year I was pushing myself into as many tournaments as possible in order to gain some important tourney experience and to bring down my handicap to the level I was hoping for.

12 is the magic number for 2015, #project12 it was called, my pursuit for greatness. I’m practicing a lot, playing as often as I can (once a week) and try to get better in all aspects of the game.

In the early period of the year I slightly changed my swing rhythm. I’m swinging much slower now, earning much more consistency off the tee—and I was happy as it always has been the long game I was struggling with.

So from one day to the other I was dead straight and even single handicappers envied my consistency. Funnily enough this came with a complete loss of putting abilities. Don’t ask me why, but for years I had decent touch around and on the greens and now, I was just not able to execute accurate putts anymore. 3-putts and even 4-putts been the result.

Last week, first sight of a weird change. Not doing anything differently, I somehow couldn’t play long shots anymore (my driver doesn’t count, I can’t hit it anyway), no 3-wood, no hybrid, no 4- or 5-iron! But my putting became better I have to say…

Whatever that is, and whatever I have to do to get rid of it, it came at very unsuitable time; my tournament season. I was down to a handicap of 14.6, now 15.1 again, although 12 was the overall goal for this year. Seems like I have to practice bit harder.

Last week’s tournament has been no exception. OK, I had a little hangover and my hay-fever is killing me currently but after a stretch of good holes and 18 stableford points on the front 9, I broke down to, I don’t know exactly 9, 10 or 11 points for the second half. My game was completely wrecked, and I went home ready to cry.

Next steps to work on:

Nothing stops me from #project12!

That’s what I learned from my last tournament and from a training session I had last week with my golf teaching pro near Frankfurt, Germany. This year leaves mixed feelings. Yes, I’ve been to two incredible courses around London and yes, it was great fun. And yes, I was playing a tournament lately and yes I scored 39 points… BUT these three rounds were the only rounds I was playing the whole year! Can you imagine that?! For a golf-maniac like I am, nothing is worse than not being on the course, believe me!

And I was playing all right, remember I scored 39 points, playing the third round this year and had a lots of crappy shots throughout the round. Imagine what would have been possible if I had the time to practice or even play regularly…

Yes I miss that! The old golf course accessibility I was used to. With that my handicap would drop, I feel that… But I can’t help it. I have to live with it and to make small steps to my single handicap.

Richard, my teaching pro, has some valuable tips for me. Still playing with too much draw he taught me how to swing a bit more from the inside to the outside, what is – as far as I was believing – the wrong approach since it seems I cut the ball more, but actually it’s the other way around. In my current normal swing, I kinda fall back (leaning too much to the right side) in the follow-through, what leads to left-orientated ball flights. Eliminating that by increasing the downswing to the outside corner, reduces the left cut and produces dead straight balls… finally!

after the last couple of rounds i made some additional adjustments to my swing. i had the feeling that there is definitely some improvement possible without any professional help. so i altered here and there and am quite confident that i can reduce some additional strokes on the round.

distance to the ball:
especially  with my woods, i always had the feeling, that i was standing too close. the result was an outside-inside upswing and some negative effect on my downswing, where i had to push the ball. combined with weight shift during the swing and a closed club face, that led to a dirty hook. i hope that i can make some more improvements in this field, since this hook is really annoying me!! but a bit more distance to the ball at address and therefore a more solid swing on the backswing is a good starting point i guess.

wrist action:
next issue i was working on is my wrist action through the downswing and at impact. the reason for that is that i always had the feeling that the club face was perfect at address but more or less closed at impact because of position transfer and weight shift during the downswing. in my opinion that could have led to my pull-hook of the last months. so what i tried is to accelerate the opening of the club face in the upswing and to really delay the closing through the downswing. result should be a more open club face at the center of the body and combined with weight shift a perfect parallel club face at impact. that would lead – in my case – to beautiful dead straight ball flights.

swing path, swing speed:
i see so many newcomers on the range, guys that are playing just for month and they are really hammering the ball instead of swinging through it! these greenhorns have twice the swing speed than mine, with 4 times strain, much less flight control and no fun at all – and only one third of my distance! i tried to reduce the swing speed even more over the last month and – guess what – the balls travel further and much straighter. all that with better swing rhythm, less speed, better path and much less use of force. that’s because exertion of force is contradicting the beauty of the swing and of the whole sport, i do believe! you know what i mean when you see mid-aged men swinging like hell, losing total control of their shots and as well of their own balance. i will never understand these people and their ugly approach to this beautiful and athletic sport!!!

believe me, guys: less upswing, less speed goes hand in hand with more distance, more control, better trajectory and more birdie chances (what equals a lot of fun)! take me as an example: i’m reducing my swing speed constantly and i have next to not one single miss-hit on the round!

time to make it serious! second training session for the year and this time it was driving, chipping, pitching and putting. so a little bit of everything on a cold winter morning (and after being at the dentist).

i feel my swing is coming back; awakening from the winter break. i learned from last time’s training session and made quite some adjustments on stance, grip and swing rythym with my new nike clubs and the result was a lot of beautiful shots right into the wind. what a nice feeling! it’s really worth it to stand in the cold winter breeze and enjoy yourself practising the most beautiful sport in the world! can’t wait to get on the course!!

hope you are confident with your results so far! let me know!