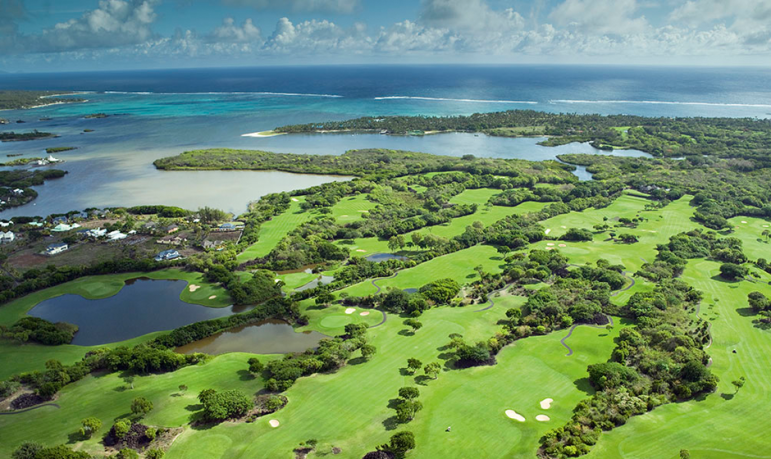 Belle Mare Plage is the name of one of the prettiest beaches on the beautiful island of Mauritius and at the same time name for a hotel and two golf courses.

Mauritius is a typical golf and honeymoon destination so it was easy to combine the two. The hotels are first class and so is the service in all related activities and amenities. We booked a tee time via the concierge at the front desk at the Constance Le Prince Maurice which is the superior hotel compared to the sister hotel Belle Mare Plage. So booking was easy and guests at the Prince Maurice benefit from booking priority.

Very regularly there’s a shuttle leaving from the hotels heading to the courses which are just a 5 minutes ride apart from each other. So somebody is picking you up, taking care of your clubs and once you arrive at the club 10 minutes later, the buggy and service personnel is already waiting for you. Somebody is greeting you with a wet towel and makes your visit as pleasant as possible.

After 2 minutes you are ready to go. We first went to the driving range which apparently is a quite unusual thing as we were the only ones. And all people which we saw arriving later on, everybody was directly heading to tee no. 1. But one bucket of balls for us was absolutely fine, especially because my wife hasn’t swung a club for like 3 years.

One thing every golfer in Mauritius has to learn is the following; the people living in Mauritius are quite poor compared to European standards. So what they do is, they sell used golf balls which they found in the bushes. I’m not exaggerating when I say we probably saw 15 people during our round, offering golf balls for sale. These people get on the property, look for balls in the bushes and then sit by the green and wait for the next golfers, i.e. customers. It was a bit weird in the beginning but after two, three rounds you totally get used to it. You even learn, that green keepers are the laziest bunch of people on the planet, but once you show interest in buying some used balls, they get over-excited, totally forget about their work – and then the price negotiations can start.

But back to topic: the course is situated on the east coast of the island, offers lots of water and therefore is called “Links”. To be honest it’s neither built on links land nor is it pure links character. I’d call it a fairly open parkland course with many water hazards – it actually looks pretty American in style. It’s a Peter Alliss design and features undulated greens and rolling fairways, both fair in size.

For the quality of the course I’d say it’s a 6 out of 10. Although it was the end of their winter (with approx. 20°C) the fairways were quite brown-ish and the greens have just been punched apparently. So it was not really good looking, but far from horrible. The setup of the holes, i.e. the architecture, was interesting so overall I’d give 7/10 points.

What’s really outstanding in terms of hole design was for instance the 2, where you’ll find huge lava stone formations on or next to the fairway. The stretch from holes 11 to 15 offers a lot of water which is not only pleasing to the eye but at the same time rather intimidating – which is good for the fun on the course.

It was definitely a nice round which we absolutely enjoyed. The golf was great, the service is outstanding and the tiny things that annoyed us (e.g. sub-optimal greens, brown parts on fairways) were forgotten very quickly. A great round of golf in total.

I definitely recommend this course in case you stay at the Constance Hotels and golf is included. Would I pay 100€ plus 70€ taxi to play here staying in another area of the island? Probably not.

END_OF_DOCUMENT_TOKEN_TO_BE_REPLACED

Normally I’m not a big links golf fan, but I just came across this video and I have to say this course looks absolutely fantastic. It immediately made it onto my course bucket list.

The website reads: “Tasmania is renowned for its untouched wilderness, pristine coastline, cool climate wines and fresh local produce. The rugged north east coast of Australia’s island state is one of the most ideal places in the world for a links golf course. It’s on this coastal strip, where stark beaches fold into undulating farmlands, that Barnbougle Golf Links has been crafted out of an extraordinary landscape.”

There’s nothing to add… and I like they mentioned good wine too!