To set the scene in case you are not aware, Belek is a small town in Turkey. It‘s situated on the south coast that they call „Turkish Riviera“ and actually there is one 5-star hotel next to each other right on the Mediterranean coastal strip — and right behind those hotels, there are numerous outstanding golf courses waiting to be tackled.

But you knew all this, didn‘t you. I made a trip to Belek already couple of years ago and managed to play five courses during my 7-day stay at lovely Rixos Premium Belek. To check out these rounds, please read the articles with the Belek 2013 tag on this site.

Now it’s time, we figured as a family with 2 kids that weren’t there in 2013 and as it’s already almost a decade ago and also as Belek has so much to offer in terms of hotel quality, beaches and what makes a great beach family holiday — it was pretty easy to decide to go.

No question will we make the best out of our 10-day trip and I will surely squeeze in some rounds of golf. It will be hot mid-July, granted, but nothing that will worry me to be honest. Golf season is over then, just makes the golf courses less crowded, I hope. 50+ sunscreen, loads of water, two shirts and a cart, and good to go. Can’t be that different from playing in Dubai if you‘d ask me.

In other words, we can‘t wait to board that plane to be honest. We are currently in the planning phase. The missus is having an eye on what‘s important to take for the kids and I‘m looking at the adult amenities and golf prep that‘s equally necessary. First things first, right? ;)

Obviously the flight will go via Antalya which is a short car ride from Belek. Antalya itself has loads to offer for tourists but it‘s more Belek that caters for exquisite hotels and golf. As well as for international soccer teams in the off-season by the way.

END_OF_DOCUMENT_TOKEN_TO_BE_REPLACED

This May I had the pleasure to stay in Belek, Turkey for a week full of golf. I played 5 different courses, all in immaculate condition and beautifully laid into the (planted) pine trees. Belek is an impressive golf mecca, no doubt about it, and my absolute favourite courses are the Cornelia and the Carya. But as well Monty’s Maxx Royal is a very, very decent club.

This is exactly where this year’s Turkish Open will be held. To be precise: “The Turkish Airlines Open presented by the Ministry of Tourism and Culture”. A very long name for a very short tradition as it’s the inaugural event. Last year the Antalya Golf Club in Belek hosted the World Golf Final, a golf tournament which was not on the regular tour schedule but attracted many high class golf players because Turkey and Turkish Airlines have put a lot of money on the table – for the winning pot but as well for just playing as well – a signing bonus heaven!

Obviously it turned into a success as we have the first Turkish Airlines Open this year from 7-10 November at the Montgomerie Maxx Royal Golf Club in Belek – not the most beautiful course around there I’d say but without a doubt a setting which is more than tour-like and fully deserve to be a regular tour event, especially being one of the 4 prestigious tournaments of the “Final Series” before the golf year comes to an end at the Race to Dubai.

Not bad for such a no-name golf country. There’s no professional Turkish tour player, the whole country has not more than 23 golf courses, 20 of them in Belek and as a result, only a tiny amount of Turkish people really play, i.e. get a chance to play. But the golf tourism booms at the Turkish Riviera near Antalya – and the country and Turkish Airlines profit from that and are therefore for sure willing to pay their stake to promote the region even further. Easy!

Please read my comments and experiences about the course here.

More information about the tournament:

And here some impressions of last year’s World Golf Final:

Belek, Turkey 2013 day 4/5 of my little trip, after one day of relaxation and battery re-charging on the beach and at the pool. I felt much better and was looking forward to the next big course that waited for me. This time it was the Montgomerie Maxx Royal, formerly known as the Papillon Golf Club and the venue of this year’s Turkish Open in November as a regular European Tour event. Maxx Royal, the premium luxury hotel accross the street took over the course once they completed the hotel in mid-2011. The golf property was already built and opedend in 2008.

As the name says Colin Montgomerie was responsible for designing this course and since I didn’t manage to play the Montgomerie in Dubai last year I was happy playing this one during my little Turkey trip.

As you can imagine the entrance, the driveway and the clubhouse itself were once again very impressive! So obviously with all Belek golf clubs you get that kind of wow-factor before you even touched ground at the first tee.

After I bought a logo ball and a yardage book (the latter still showing the Papillon logo, obviously a remainder since 2011) I was heading to the driving range for some last-minute shots. 10 balls later I made my way to the starter and met my group partner for today, Heinz, a German guy from Cologne. And really the most typical guy from Cologne you can imagine: everything was classic; handshake, dialect, swearing, beer-thirst and outspokenness. We got along very well and it was a very funny round in the end at which scoring was not important anymore after, I guess, hole 4!

But back to the course itself! It has a similar feeling to the Gloria New for my liking, comparing the setup, the tree lines and hazards. The only thing that’s different is the numerous huge waste areas Monty has put here and there to make the golfer play out of sand more often than usual (in case you missed the fairway occasionally). You’ll find these waste areas on most of these holes at Maxx Royal and they create a complete new sort of hazard in front of greens, left or right of the fairway in driving landing zones etc. In the end the fairways get tighter and tighter and the golfer has either to adapt his play immensly (re-clubbing) or has to be quite sure he’s able to strike the ball straight as an arrow. If you do neither of that, like me, you end up in trouble, which I did…

First big downside of that club to me is the proximity to streets, commercial areas and water fun park facilities of several hotel complexes, so there is a constant noise level around the golfer. It could be such a perfect course would it be detached from all that fuzz and a bit more remote. But it’s not and everybody has to deal with it. Heinz wasn’t distracted at all. He played the course the third time this week and was used to it, he was more looking for the service cart for ordering a new round of beer.

We were playing from the yellow tees, which I thought were the men’ tees and which I did the whole week, but here at the Montgomerie it seemed to be the ladies tournament tees, they only have 4 not 5 tee boxes. I noticed that not before we were half way through our round and there was no sense in changing that thereafter.

The course was jam-packed with people! We were stuck in the middle of 4 foursomes, so no way to speed up a little. Hence we chatted along and had good fun anyhow. It really surprised me that is was so busy. The Cornelia was so empty two days before and the Monty course I think is the most expensive course in Belek currently (up to 150€ plus cart etc.). That was, next to my lousy golf, the only thing that annoyed me, it’s expensive but still so busy that you can’t play at your own pace. Most of the time there were 3 groups of players on each par 4 hole and we had situations in which we joined the 2 groups in front of us at a tee box waiting. That was a bit annoying I have to say. But it was warm, we had drinks, we had a comfortable cart and stayed in good mood most of the time.

The course has five par 5s and five par 3s. Some of the par 5s are probably reachable in two, others are not at all. There’s water coming into play at a decent amount of holes and bunkering and waste areas add up to tricky shots as already explained. The overall course character is again comparable to the Gloria New, pine trees all over the place but you will find most of your balls that end up in the rough.

It was very windy during the round which caused us a bit of trouble with water hazards. So if you wanna go diving over there you most likely will find some Golficiency logo balls and some Penfold Black Hearts.
Most memorable for me in terms of holes is the 16th I guess: a short par 3 with a huge waste area in front of the green. It’s supposed to be reminiscent of the third hole at Pine Valley.

So overall this course is best for those golfers who strike the ball very well, can probably shape the ball a bit and are pretty accurate in direction and distance as the landing areas are pretty small. For all the others: learn playing from the sand, the dropping zones or out of the trees! It will happen!

If you’d ask me whether I would play here again, yes I would, but please under other circumstances. The course itself is very nice and deserves international attention for sure, even though it’s not the best course in Belek for me.

Use the tag Belek 2013 to read all course reviews of that trip. 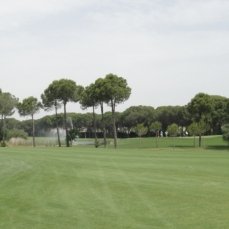 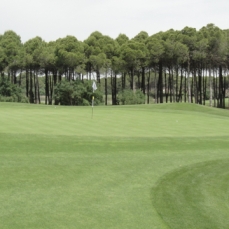 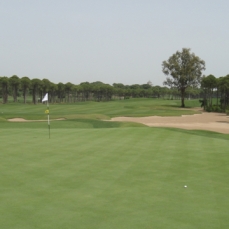 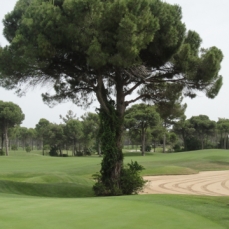 Fond memories of this course, too. Mannheim-Viernheim, ticking quite some boxes!
Menaggio e Cadenabbia Golf Club in May this year. Still in knee pain, I really felt this hilly course.
Flashback to one great round at GC Mommenheim.