I don’t want to show off but after puchasing a new set of clubs I’m still so proud and so happy about my new equipment that I decided to show you guys a bit more of it. Could have done a “What’s in my bag” video but I thought I leave that to professional players and 14-year olds scratch golfers who present their parents bags.

Anyway, I ordered my clubs online, fitted to my needs with custom shafts and shaft lengths. The irons are standard length but the driver is -1 inch and the 3-wood is -0.5 inch. So far I think that was a very good idea. Furthermore I’m very happy with the shafts themselves, the Diamana ahina is just perfect for me. It’s a mid to low ball flight with less spin, but if you’re looking for some adjustments you can do so with the Titleist SureFit hosel and put some extra trajectory in the game. I don’t need that and am very happy with my 9.5° 910D2.

To give you a better feeling for the beauty of these clubs, I took some pictures. If you’re following me on Twitter or Facebook, you’ve probably already seen these pics. Starting with an overview, this is what it’s look like. A real beauty! 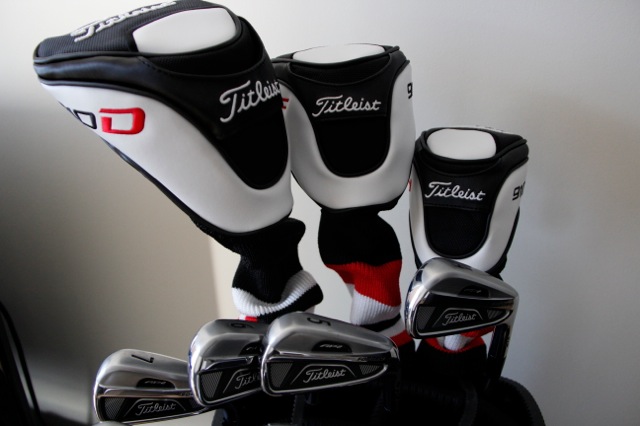 The woods are the current 910 series, that’s supposed to be detached by the 913s next year. You’ve probably already seen some pictures on the internet and some pros are testing them as well but I thought the difference can’t be that big and for a weekend player like I am, nothing I could feel.

The irons are the new 712 AP2 series, 4-PW with ProjectX 5.5 steel shafts. On the one hand these shafts look cool and stiffness-wise it’s exactly that what I was looking for.

The club heads are forged and have a good feeling. I haven’t played the MBs or CBs to have a comparison, but I think the AP (advanced performance) technology is helping a lot with off-center hits, although the MOI is quite low and you have perfect distance control. Can’t really say something about shaping capabilities since I mostly try to shoot straight shots.

My wedges have ProjectX 5.5 shafts as well, just to match the feeling of the irons. And it works! They give you great feeling. That said, I again have to admit that I don’t really know many other wedges I could compare them to. But anyways, they are very good! 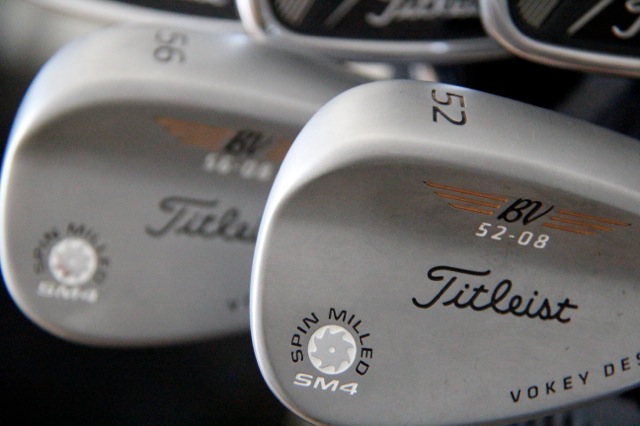 Last but not least: I moved away from my beloved Odyssey Dual Force Rossie II mallet putter and went for the Titleist Scotty Cameron California series, the Del Mar to be precise. It’s kind of a mallet putter but isn’t face balanced. So the feeling is a bit different but again, it plays very nicely – even without any inlay, just with so-called deep-grind.

Future will tell whether putts will fall or not.

That was it. It don’t make the effort to show you the rest, the new bag, umbrella, towels, accessories. Maybe next time.

And one last sentence: these clubs are sooo good, do yourself a favor and get yourself the same set. Get fitted or read specs on the internet and then take the (financial) effort and go for it. You won’t regret it.

hi guys! it’s mid-january and i’ve started my season this morning. can’t remember that i did this before that early in the year. however, it was nice. not only because i enjoyed being out there again after a 3-month-break, but i could as well try out my new nike irons and could make first experiences.

truth be told, i began with the 9-iron and the difference between these and my old irons (taylor made steel 200) was not as big as expected. but when it came to the 6-, 5- and 4-iron you can feel the bigger moment of inertia and it really smashes the ball like a rocket! amazing feeling. when i additionally can get precision to my iron play like i had before, then i’m a lucky guy!

as i already said, the support by the perimeter weighted irons ceases on shorter irons, so i think about removing the sand wedge and sticking with my beloved titleist vokey wedges (52.08, 56.08, 60.04) which are only played once actually. these are feeling great and are – due to their slick drop shape with exact bounce – much more workable and universally usable around the greens. and that’s where the points are lying; you know what i’m saying!

i fired roughly 150 balls this morning and had some nice shots. pretty confident that i can achieve my personal goals for 2011 quite quickly. first would be getting used to the new irons, getting expertise in wedge play and around the greens in general and then shooting my woods as straight as i wish… which leads to the plan of breaking 90, lowering my handicap to smth like 15 or so and to play as often and as many courses as i can by the end of 2011. this year’s gonna be huge!!

i will keep you updated for sure and wish you everybody good luck for your personal start into the new year!